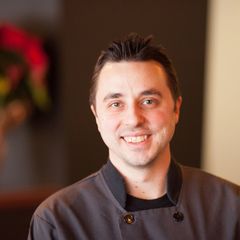 Chef William Davis obtained his A.O.S. in the culinary arts from The Culinary Institute of America ’98. His career began in Cleveland at Johnny’s Downtown where he quickly established himself in the kitchen and became the head Banquet Chef. He combined his love of travel with his passion for food and found himself traveling to all 50 states with stops at the Starlight Roof at the Chase in St. Louis, Café Blasé on Cape Cod, Druid Hills Country Club in Atlanta, AJ’s Fine Foods in Phoenix, and other dining establishments along the way. Chef William owned his own bakery and deli, Appetite, with his brother for 6 years in Lyndhurst, Ohio. There they found their niche doing catering on private jets for sports teams, rock stars, kings, celebrities, and other private citizens. Chef William has taught recreational classes for the Loretta Paganini School of Cooking for the past 10 years, been the Sous Chef for Sapore, and is now the Admissions Director and Chef Instructor for Student Café at ICASI. He finds food is his way he communicates with the world.

© 2021 ICASI is registered with the State of Ohio Board of Career Colleges and Schools OBCCS 1652T, ACCET 1494
A Quez Media Design